Natural Cure for a Toxic World

It seems to be an all too common occurrence that people are getting sick and their bodies are breaking down for unexplained reasons. Yet, there are always reasons. We are unaware that much of our sickness and suffering is the result of living in a toxic modern world.

Many minor and serious illnesses are due to toxins bombarding and polluting our bodies. We do not realize how many dangerous chemicals we are exposed to within an average day. From the cleaning agents we use to disinfect, to the air we breathe and the food we eat just to live, we are constantly ingesting toxic chemicals and metals. These toxins do not leave the body so easily. They are stored in the body’s cells, causing people to become sick and suffer severe symptoms. Much too often, people are then prescribed medications by physicians to help cure or alleviate the pains of our illnesses, which ultimately cause more toxic chemicals to build up in our bodies, causing more sickness and pain.

Unfortunately, we are caught up in a constant cycle of slowly poisoning ourselves, and are not even aware of it. Our aliments can often be easily avoided, healed, or relieved through the natural dietary supplement of zeolite, and sadly few people are aware of the power of this amazing mineral.

What Exactly is Zeolite? 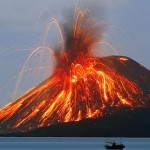 Zeolite is formed when volcanic ash settles on salt water.

Zeolite is a highly absorbent, natural crystalline mineral. Unlike modern medicine, it is not made in a lab, but mined out of the Earth. Millions of years ago when volcanoes erupted, thick layers of ash rained down into salty lakes and seas. The reaction between the volcanic ash and these waters formed the unique, sturdy structure of zeolite. In essence, zeolite is a porous, honeycomb-like structure, with a negative charge, which allows for positively charged molecules to be pulled into its cavities. These cavities are surrounded by a strong cage-like structure, which prevents the zeolite from being broken down. As a dietary supplement, this means that zeolite is able to pull positively charged toxins out of our body’s cells, and then travel safely through the body and is expelled, without re-exposing us to the toxins.

There are 3 types of Zeolite

Of these various forms, only the crystalline form of zeolite called clinoptilolite is safe to ingest.

Yet due to impurities, NOT all clinoptilolite is safe to ingest. Since zeolite is very absorbent, it often sucks up many metals and other contaminants while in the Earth. For instance, green zeolite indicates the presence of deadly amounts of manganese, while pink zeolite signifies dangerous amounts of iron. Consumable forms of clinoptilolite should appear as an off-whitish to grayish color.

Furthermore, consumable forms of zeolite should NOT originate from any North American or Asian mines because of the amount of industrial pollution. Zeolite from these continents are among the dirtiest forms of clinoptilolite, and should only be used for commercial purposes, such as for cat litter and concrete production.