Based upon extensive research, there are obviously a few zeolite health supplements which are superior to others. These recommendations are based upon the quality and purity of the product.

1. Zeolite Pure-the most economical of any zeolite products. This 400 gram container contains nothing but finely micronized zeolite powder. The product can be used to detoxify the body, help an acute health issue, or just maintain a toxin-free body. If consumed once a day, the product will last about 3 months. *(The company suggests using the product once a day for maintenance,  twice a day for detoxifying, and three times a day for a specific health issue.)

2. Destroxin– focused on detoxing the body. The 90 capsule bottle contains zeolite, vitamin B-12, and calcium. Originally designed with cancer patients in mind, the B-12 is to improve energy, while the calcium helps to settle stomachs. Calcium is also an alkaline mineral, which helps in balancing pH levels.

3. Esdifan– focused on fighting diarrhea. The 90 capsule bottle contains zeolite, vitamin B-12, and calcium. The major difference between Destroxin and Esdifan is that Esdifan contains higher amounts of B-12 and calcium, which helps with blood flow and to harden stools. Furthermore, Esdifan has a larger zeolite particle size than the Destroxin, which means the zeolite is held in the gut longer, allowing it to detoxify the intestinal tract more thoroughly.

4. Zeolite-AV– for ridding the body of viruses. (The “AV” in Zeolite-AV stands for “Anti-Viral.”) The 90 capsule bottle contains zeolite and humic acid.  Humic acid is an organic substance commonly found in foliage and is extremely effective in stopping viruses from replicating. Essentially, the humic acid works by wrapping itself around viruses, forbidding them from further infecting health cells. After being encapsulated, the immune system can then recognize the viruses as foreign bodies and destroys them. The zeolite works in conjunction with the humic acid by pulling pre-virus components out of cells, which stifles anymore viruses from forming.

Liquid zeolite supplements have become popular with in the last few years because people love the convenience and simplicity of it. But you need to be very careful when buying a liquid product! Since zeolite is a mineral that cannot be liquefied, almost all of the liquid zeolite products contain a significant amount of water, and minuscule traces of zeolite.  Many companies blatantly lie about how much zeolite is in their liquid product to fool consumers into thinking that they are not just buying water. Please be careful and don’t get fooled by these companies! 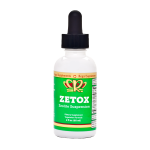 After researching multiple liquid companies, there is one in particular company that sells a quality liquid zeolite supplement. Regal Supplements manufactures a zeolite suspension product called Zetox. Although Zetox does contain some deionized water, the large majority of this product is zeolite and vitamins.

Zetox contains an honest 100 mg of micronized zeolite, vitamin D-3, and vitamin B-12. The B-12 helps significantly with energy levels and circulation, while the D-3, of which a majority of people are severely deficient, relieves depression, boosts the immune system, sharpens brain functions, and strengthens bones. After taking this product for only a day, one can feel a huge difference in energy levels and the ability to think clearly.