The Danger of Mercury in “Silver” Fillings

The negative health effects of “silver” dental fillings have recently become something of concern to the public. These types of filing have been used for decades, and are known for their reasonable cost, durability, and strength, but are now also becoming known for their potential damage to the body. According to the FDA, “Approximately 50% of dental amalgam is elemental mercury by weight,” which can leak out about 1 to 3 grams of mercury daily. 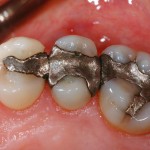 Silver fillings have become a health concern because they leach mercury into the body.

Over time, mercury leaches from the filling, and then it is absorbed by the surrounding tissues in the mouth. From there, it travels further into the body. Some mercury will be flushed out through the natural excretion process, while most will be absorbed by the body’s cells. When absorbed, the mercury will build up in cells, causing disruptions to cellular functions and creating instability. Though the full extent of mercury poisoning is not completely known, it will cause damage to the central nervous system, immune system, cardiovascular system, and digestive system. There are countless devastating symptoms associated with mercury poisoning, including fatigue, anemia, chronic headaches, kidney disease, arthritis, abnormal blood pressure, arrhythmia of the heart, abdominal cramps, diarrhea, speech and vision impairment, tinnitus, bone loss, loosening of the teeth, and open sores in mouth.

Since discovering the dangerous, toxic nature of silver fillings, many people are electing to have them removed. Be careful! This can often be worse than keeping them because, when disturbed, the fillings will release an immense amount of mercury vapor. If you are planning on having your metal fillings removed and replaced by resin based composites or porcelain, it is crucial that the procedure is performed correctly by a highly trained, very skilled dentist, to reduce your risk of mercury vapor poisoning.

Whether or not you decide to have your silver fillings removed, you should be taking zeolite. Zeolite has the proven ability to remove mercury, and a number of other heavy metals, from the body without the experience of a healing crisis or adverse side effects. A daily dose of zeolite will pull out mercury from cells that it has accumulated in over the years, in addition to any new mercury that may leach from the silver fillings. The zeolite will not pull mercury out of or corrode your fillings; it only detoxifies the body because it travels through your entire body over a 6 to 8 hour period. If you have had your fillings taken out, there is still mercury built up in your body, and zeolite should be taken.

For the most potent zeolite on the market, please visit ZEO Health. They are the original manufactures of zeolite health supplements, and only use the purest micronized zeolite on the planet.